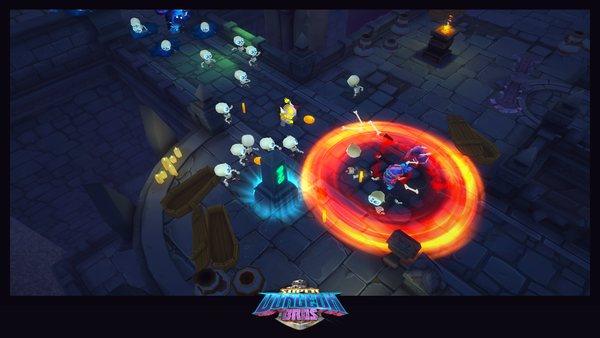 Throw that chain-mail over your shoulders, sharpen that sword and cram on that helmet, it’s dungeon-crawling time. American developer, React! Games, who started life by remaking ARCHON for PC and iOS, have announced a fabulous new IP coming this autumn on Xbox One.

Super Dungeon Bros is a rock music themed co-op dungeon brawler in which a band of four super-tough bros must pillage the endless dungeons of Rokheim, a giant scar of godforsaken earth, where wars are waged in epic dungeons by the gods themselves. Buckle-up with up to four players controlling the hard-rocking warrior bros in the ever-changing dungeons which combine rock fantasy, dangerous foes, deadly obstacles and hazardous puzzles. Wayne’s World it is not!

The action will be more intense than a riff from Dragonforce as you plunder loot and take on end of level boss fights, all to the mantra of ‘Bros B4 Foes!’. The game will feature upgradeable weapons and as you can see from the trailer below, co-operative multi-player action.

We fell in love with Super Dungeon Bros the second we set eyes on it, and we knew we had to bring it to players worldwide. With the experience we’ve gained in developing music games, and our full on charge into digital publishing, partnering with the team at React! to bring some Rock into the fantasy world of Super Dungeon Bros was a match made in Rock Heaven!

Super Dungeon Bros will have elements that carry over from the single player campaign too, scaling itself for it, so any player can rock out on their own to the dungeon beat. The bonus with this is that you’ll keep any collectable you pick up along the way, to be used in the co-op mode. Daily and weekly challenges are promised too, as well as dedicated leaderboards.

Here’s the trailer then, get ready to rock out with your axe out.