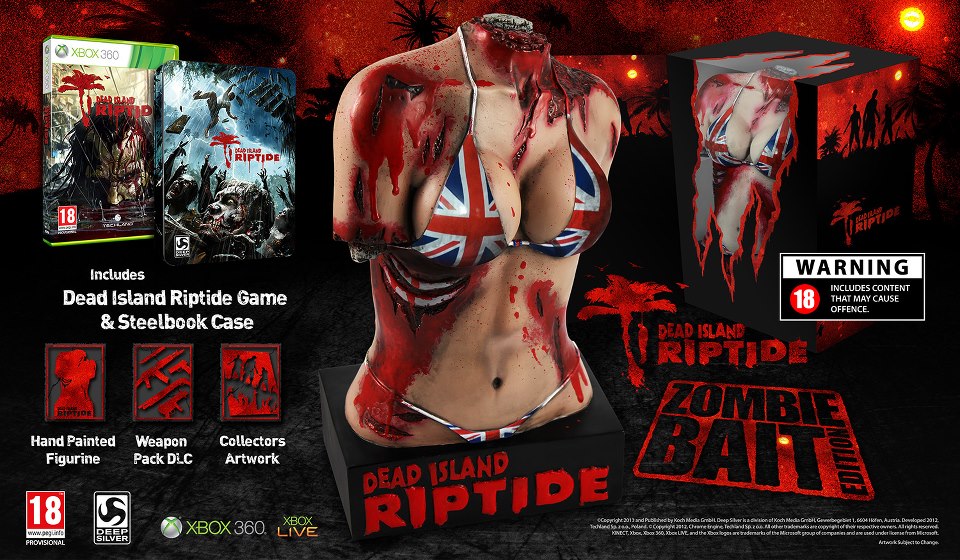 I thought it looked a pretty cool package all in all, admittedly looking at the statue of the torso of a woman wearing a Brit flag bakini top and thinking… “wow there must be some real savage Zombies?” in this sequel!

The Zombie Bait Limited Edition has caused a bit of a ruckus, upset a few folk and now Deep Silver has released an apology over their choice of statue as detailed on Twitter:

“We deeply apologize for any offense caused by the Dead Island Riptide “Zombie Bait Edition”, the collector’s edition announced for Europe and Australia. Like many gaming companies, Deep Silver has many offices in different countries, which is why sometimes different versions of Collector’s Editions come into being for North America, Europe, Australia, and Asia.

For the limited run of the Zombie Bait Edition for Europe and Australia, a decision was made to include a gruesome statue of a zombie torso, which was cut up like many of our fans had done to the undead enemies in the original Dead Island.

We sincerely regret this choice. We are collecting feedback continuously from the Dead Island community, as well as the international gaming community at large, for ongoing internal meetings with Deep Silver’s entire international team today. For now, we want to reiterate to the community, fans and industry how deeply sorry we are, and that we are committed to making sure this will never happen again.”

…and there you have it – but by all accounts it doesn’t sound as if the statue will be replaced in anyway when Dead Island Riptide hits retailers on April 26th 2013.