Here I am now almost half way through 2016 and my quest to play as many games as possible continues. I have a new furry cover for my gaming chair, because I’m a classy guy, and I’m settled in for a session with Neon Chrome, the new title from 10tons studio (who made Crimsonland).  Neon Chrome is a cyberpunk top down shooter. The two comparisons that instantly spring to mind are Spartan Assault and Genre defining Hotline Miami. Of the two I would say it’s closer to Hotline, mainly because of the ruthless and bloody nature of it. The game is set in a sci-fi megastructure which is looked after by the Overseer and the two of you don’t get along. Cue the 30 level fight up through the building to bring the Overseer to justice.

Except it has a lot more depth to it than that. As I played through the different attributes of the game showed and I found more and more to like about it. The gameplay is simple enough, as you would imagine from a top down shooter, but the way in which you go about it added a lot for me. You have 30 levels to go through and large parts are randomly generated meaning no route to the overseer is ever the same. I have played for a fair bit now and haven’t come across the same bit twice which is great. Added to that is the almost RPG style in which you build your character. You can have permanent upgrades on attributes like luck and health for example available to buy with in game currency you earn through playing. Surprisingly to me as I played, the weapons have numbered stats and levels to compare which give you plenty of options for your style of play be it up close and personal or maybe more ranged and stealthy. This also means that just hanging onto the same gun for your play through isn’t an option as the later levels have much stronger enemies to face. There are keys and access keys to collect to gain entry to different bits of the level and sometimes alternative exits. There are some destructible scenery areas such as thin walls you can break through and boss fights spread out along the way that all make it a challenging endeavour. There is in-game loot to pick up, better weapons and currency as well as a range of upgrades available through in level stations. You can build up each run quite differently for different play styles, which I really liked. 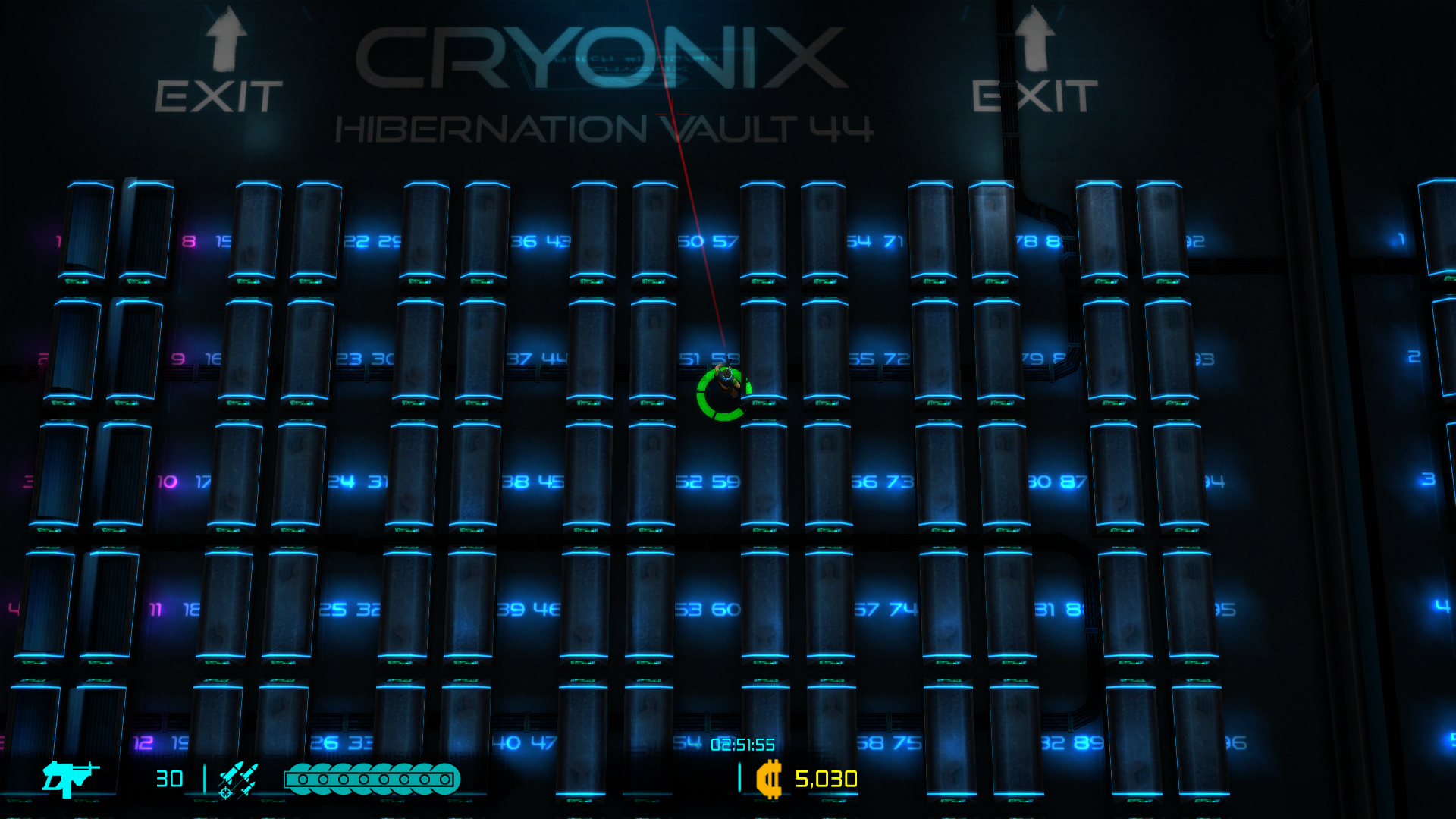 Here’s the bit that got me, you sit in the immersion chair and then become another character, from a numbered set stasis chamber. When you die, that character is gone and you pick another to start off another run or go back to your last checkpoint (which are not close together). It’s seems odd but the perma-death for each character made me oddly attached to each one, I found myself tight gripped and tense trying to get through to a health station so that Maxwell Lovelace (my first hacker character) wouldn’t die and be lost to the digital graveyard, although he’ll probably come round again in the listing. I doubt it’s truly endless. Side note; he didn’t make it. There are different types of cyborg soldier to pick from with every new immersion and each has different abilities, you have a hacker who can access things that the rest cannot or the Cyber Psyco who deals more damage as two examples. personally I tend to favour the more damage option, but the stealth assassin is good fun too, just my personal preferences really, but I liked having the extra damage when you reach a boss round as its often a high damage scenario. The difficulty of the game also kept me playing, I wanted to get further and beat each level and got frustrated when I died as not only did I lose some progress but also my new character. However, with each death comes a chance to spend some hard earned cash on your next guy or gal and head back in with more firepower or a better gun, and really, isn’t that what it’s all about, bigger and better guns? I really enjoyed the weapon choice as each new loot box was a chance to see if I got a different weapon or maybe a better version of what I have already, either way, loot boxes should always be raided when you’re going through the tower. 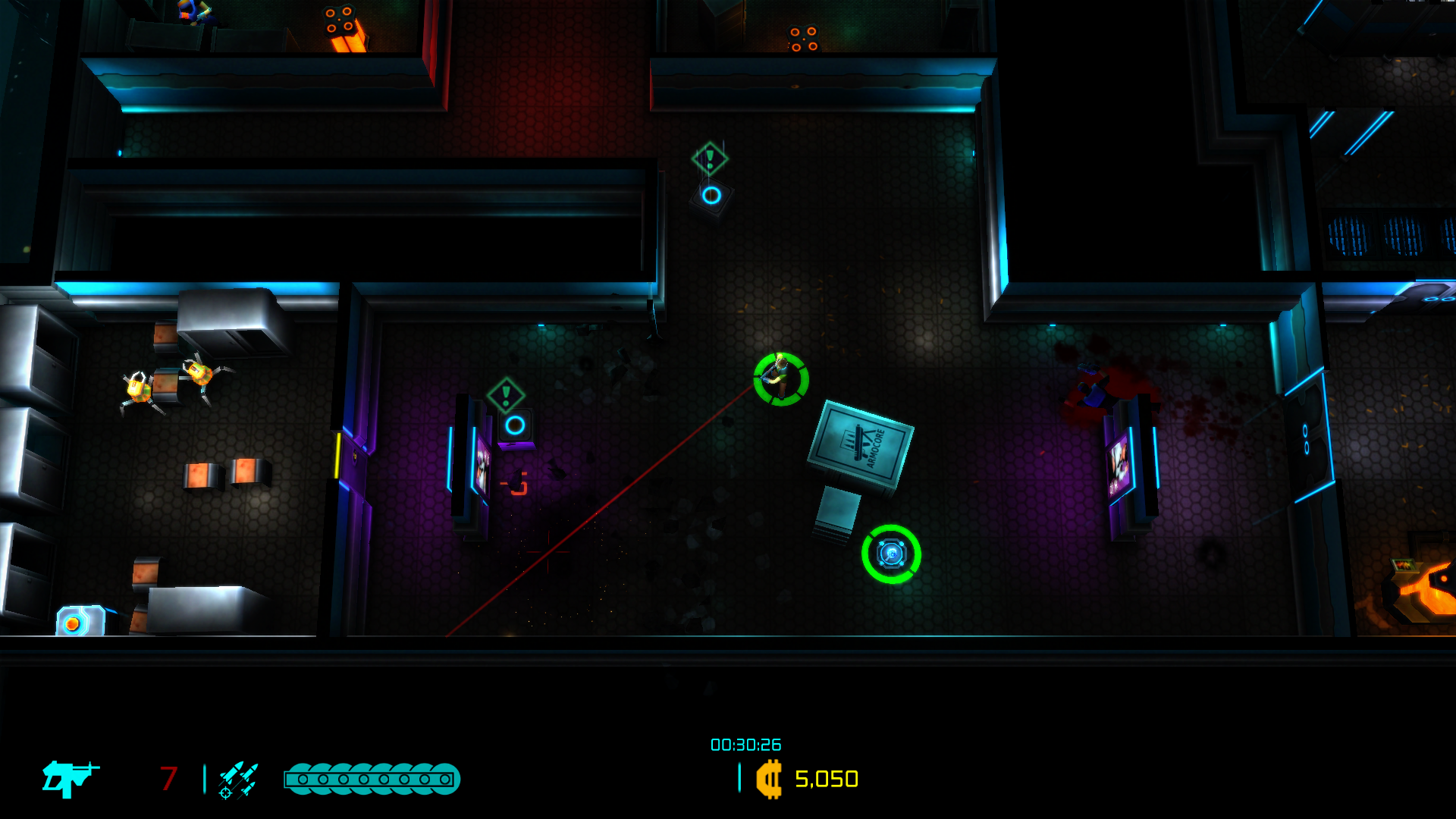 I found it tough to get this kind of attachment playing Spartan Assault, even though I have strong emotional feelings for the Halo series (bordering on worrying). I just couldn’t get into it in the same way as this game. The whole atmosphere of the game is pretty cool too, it reeks of 80’s influence (very much like the essence of Far Cry Blood Dragon) in the music and the graphics. It all fits together to create a very enjoyable gaming experience.

Its quick paced action makes it fun to play, it’s not an easy game either which is always appealing to me as I don’t like to walk through a game and then be done with it. The random generating for levels certainly gives it more length as even when you have made it to the end you can have another run through and it be a totally different layout and experience. The character progression and upgrading is a nice touch too, it adds more and is welcomed into a style that can be very repetitive and similar. Even though you are just shooting and making your way through the map, the way in which you go about it, the extra options and features mean it was very rarely repetitive and definitely not boring.

TiX thanks 10tons Studios and Xbox for their support