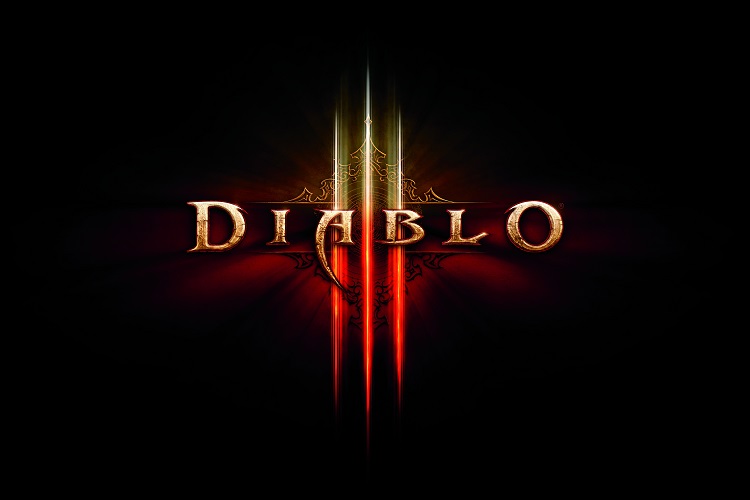 Diablo III is the third in a series of iconic PC cooperative dungeon crawler RPG’s. The franchise is well known and respected in PC gaming circles; it ranks high up there with other RPG’s and dungeon crawlers like Neverwinter Nights and Baldur’s Gate.  It is quite literally one of the industry’s most popular franchises, a battle between Good and Evil, Heaven and Hell, and now Blizzard have released Diablo III, the Reaper of Souls expansion and a bunch of other features in the all new Ultimate Evil Edition for Xbox One (amongst  other systems).

To date Over 13 million players have battled the demonic hordes of Diablo III. That’s an outstanding achievement considering a third are console players. The Ultimate Evil Edition contains both Diablo III and the Reaper of Souls expansion set together in one definitive volume with some tweaks and patches added in for good measure. The main storyline is still intact with an expansion that includes a fifth act based in Westmarch, but now additionally added is an open world Adventure Mode in which players will revisit locations from the story and hunt bounties on the elder evils that lurk throughout the mortal realms. Players can also complete boss battles and enter Rifts to fight for rare loot and heaps of gold. Adventure Mode is only available to players who complete the main story; whether solo or with other players in CO-OP Mode. 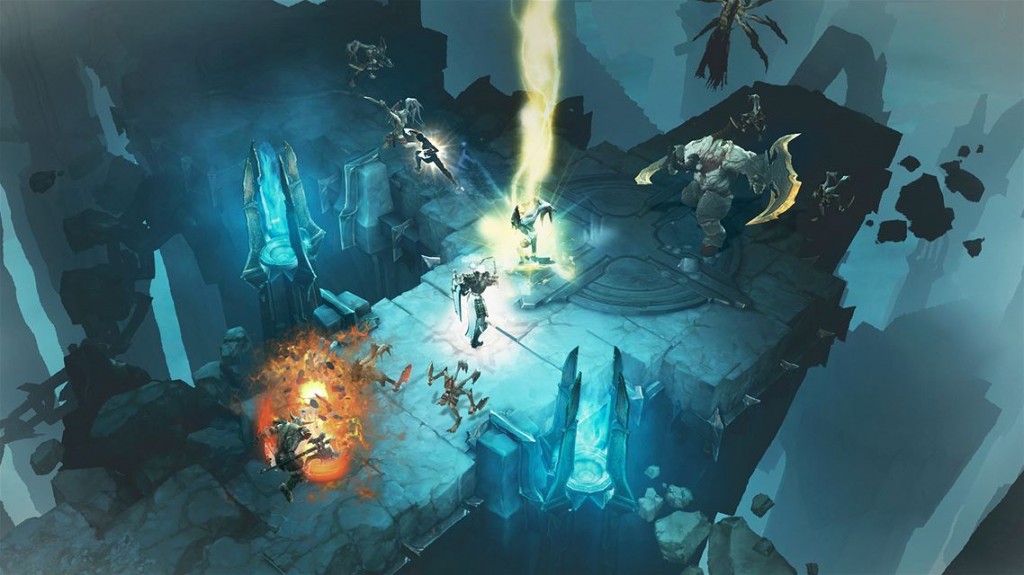 Like its predecessors, this iteration is a diabolically (like what I did there?) hellish, cooperative dungeon crawler that isn’t afraid to ratchet up its toughness from time to time. Diablo III, while featured completely in 3D with a 3D environment, follows closely in Diablo II’s track by using the classic isometric view, fast gameplay, and randomized content for high replayability. Some changes have been made in order to make the game more welcoming to new players or to ramp up the difficulty more smoothly, and to create a deep and engaging combat system. The Diablo III developers took inspiration from previous games in the series as well as World of Warcraft. This latest behemoth offers a bevy of different degrees of challenge in the form of Normal, Nightmare, Hell & Inferno difficulties. There are multiple Inferno difficulty levels you can attempt, but you’ll need the right gear.

Other new features added to Diablo III: Reaper of Souls – Ultimate Evil Edition, include  an Apprentice Mode where the game will automatically boost the stats of lower level characters so they can match up with higher level characters in a multiplayer game. The bonus only lasts for the duration of that MP game. Also the Nemesis System can take a monster that kills one player and make that monster appear, with added powers, in the game of someone on the friend’s list. If the monster kills that player, it will go to another person on his Friend’s List and so on, up to five times. Kill the monster and be rewarded accordingly. And finally legendary items found in multiplayer games will automatically be distributed to the class who can use them best. Whilst on the topic of legendary items, they will sometimes drop for players on your friends list, and when picked up will automatically be sent to them, with a notice when they log on showing where the item came from. 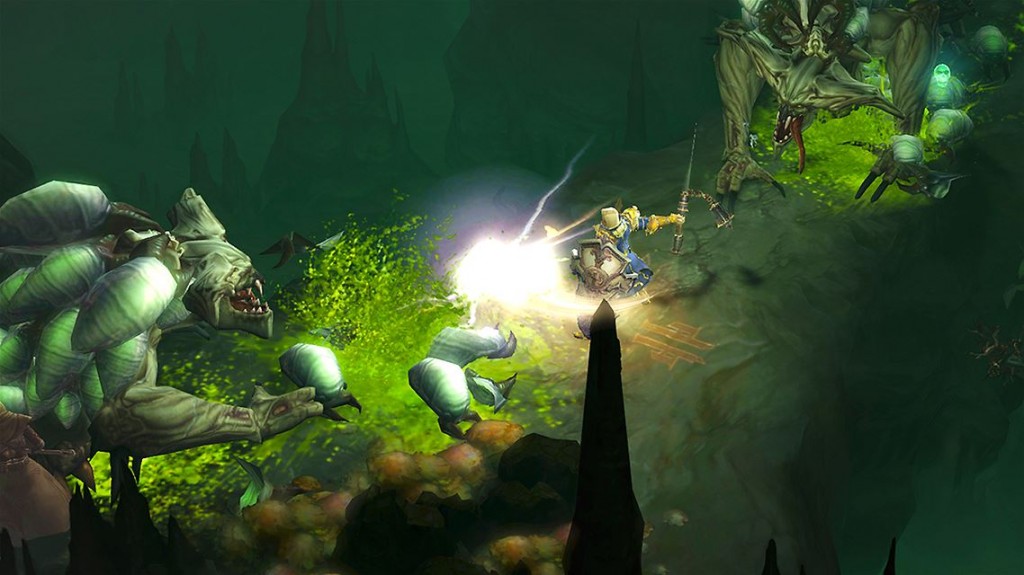 In terms of customisation, players are given the opportunity to pick and name their character, choose its gender and class from several different archetypes; some of which will be familiar to role-playing fanatics. First up is the typical hulking muscle ripped Barbarian, a close combat specialist. Next is the speedy monk with strong Eastern martial arts influences, then the nature-wielding, necromancy practicing and alchemy expert Witch Doctor. The final two classes from Diablo III are the ranged Demon Hunter who specializes in crossbows and trap laying and finally the expected Wizard, pure spell caster who focuses the arcane and elemental energies and transforms them into destructive offensive spells. Introduced in the Reaper of Souls expansion was the Crusader class. Crusaders are an off shoot of the Paladins, holy warriors of the Zakarum church. The developers have described them as a sort of “special forces” branch of the order, specially trained and geared to battle evil in all forms.

The thing about Diablo games, and especially III, is that they are action-packed right from the get go and Diablo III ups the ante on most if not all of its peers. It doesn’t matter where you happen to be standing, the likelihood is that there are enemies in extremely close proximity to you and your party. Enemies are monstrous in their design and range from the grotesque to demonic, mutated and downright vile. This is a game about good trying to overcome evil and these enemies are everything you might have had nightmares about from childhood to adult life. Because of the sheer number of them it is best to make sure you are always fully stocked on health potions. Playing Solo (offline or without a local 2nd, 3rd and 4th player) you’ll probably die quite a bit, especially near the beginning. During those early quests I was continually swarmed by hordes of foes that killed me with relative ease – the bastards! 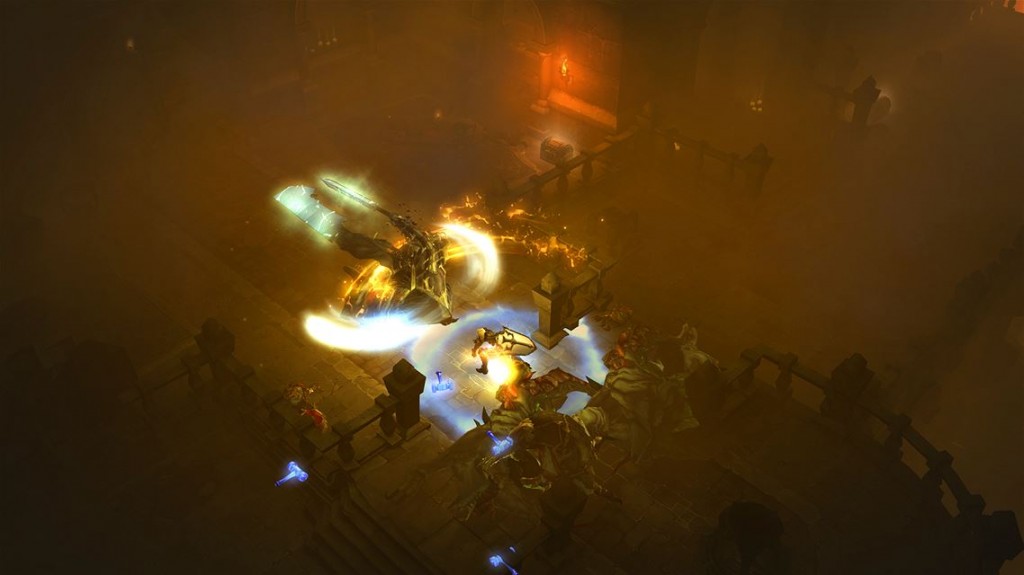 If you haven’t heard about Diablo prior to this game, one of the biggest achievements for Blizzard has to be the fact that whilst playing Diablo III you’d be forgiven for thinking it had been designed for console from the outset. Graphically you have to remember that Diablo III was originally designed for PC and Mac, therefore when running on the highest settings, the game will always look better on those platforms than a console. That said, the Xbox One is far from slacking in this department because on my 48inch HD TV the Xbox One version looked fantastic. The visual design is captivating and more than pleasing to the eye. You’ll understandably encounter some minor screen tearing, and a tiny bit of slowdown here and there, but they’re more hiccups than problems and don’t detract from the overall experience in the slightest. The frame rate fluctuates during big battles on screen where there were tons and tons of hideous monstrosities on the screen.

If you enjoyed Diablo III on Xbox 360 or had been waiting for the well rumoured Xbox One version, then don’t delay, get out there and buy it. It’s a fantastic port and is one of the finest dungeon crawlers I have played in a long, long time. It is action packed, it’s a loot lover’s dream and single player is rewarding and fun whist there is great online and/or local cooperative action. If you’ve never played a Diablo title before and are looking for something new to try with friends, then again this should most definitely be on your radar. From me to you Blizzard, job well done.