Fruit Ninja is one of those games that you need “just one last go” and it was the only Kinect game I bothered to regularly play on my Xbox 360 – mostly when friends were over for a few drinks – it was fun and the motion controls worked really well. Kinect has had quite a rough run since its release and not even the more advanced Xbox One version could save the device from being labeled as a failed gimmick. For those of us that want more than a voice activated remote control, there are a small number of games that are worth playing and Fruit Ninja Kinect 2 is a welcome addition, but can Halfbrick and Hibernum Créations inject a new lease of life into the fruit ‘em up? 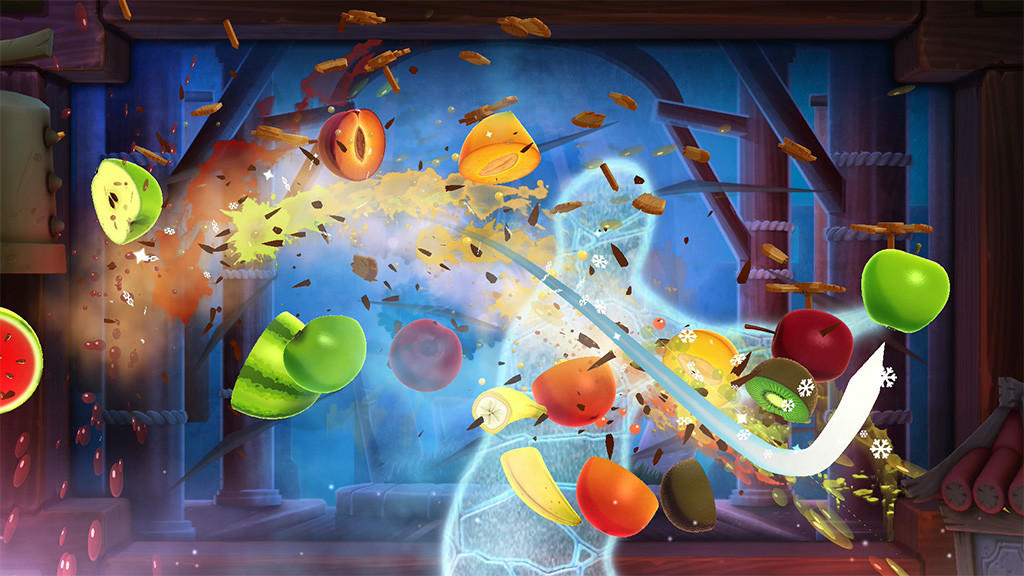 As you’d expect, multiplayer is at the heart of the Kinect sequel and it returns with Battle and new mode on the block, Party. Battle has a new twist, the power-ups are now power-downs and by slicing one of the super bananas you can impede your opponent by flooding their screen with bombs, reducing the size of the fruit or speeding things up. It makes for some amusing matches, although I would have preferred a few more power-downs – there’s just not enough variety. I also feel that the frequency of the super bananas needs to be higher and made slightly harder to slice. Rather than offering a preset multiplayer experience, Battle should have had its own set of options so you could choose the length of the game and frequency of the super bananas.

The most fun to be had in multiplayer is with Party mode, where four players can challenge each other with the added thrill of mini-games that are activated by striking a special coin. There’s a good variety to them with the weakest being the Ninja pose – Kinect struggled to recognise each position – the most fun is the Ninja stars that you throw at passing balloons, the novelty of throwing rather than slicing was a big hit with my household. Another family favourite was where you have to avoid a spotlight while still attempting to slice fruit – it was most entertaining watching the family duck about while madly trying to slice the fruit. 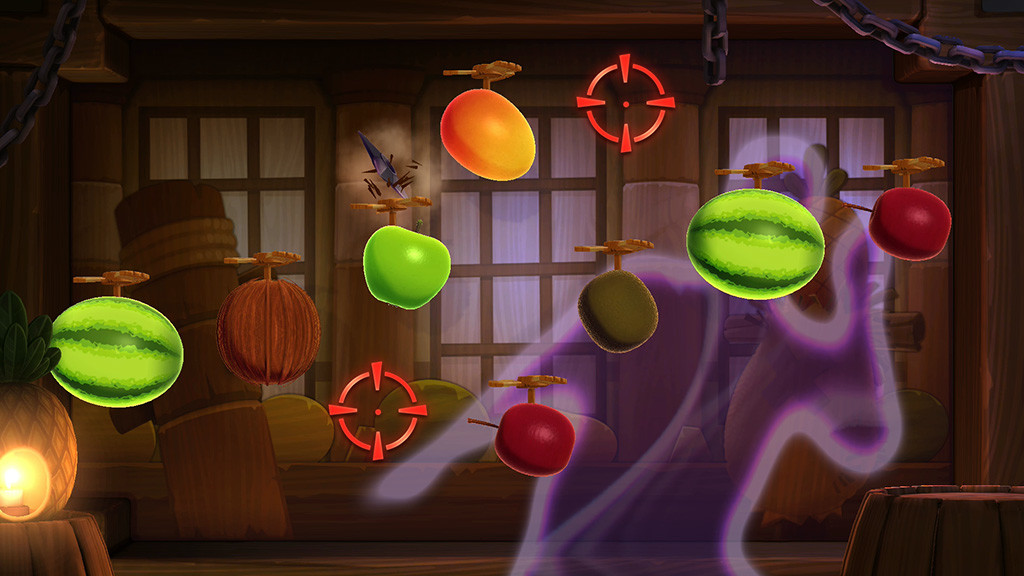 Outside of multiplayer, Arcade, Classic and Zen mode return. Arcade is a timed fruit-slicing mode. Classic gives you three lives, missing a fruit will lose you a life and hitting a bomb is an instant game over. Zen mode is just you against the fruit in a peaceful timed fruit ‘em up. Each of the modes can also be played, for the first time, cooperatively and also include new power-ups but before you get too far into the quick play modes it’s worth checking out the four new game modes that are introduced by different sensei in the Festival mode.

The four modes see you jumping about dodging spotlights or shurikens, slicing seeds before they grow into bamboo shoots and obscure the screen, or throwing shurikens to pin fruit onto targets. It’s all good fun, although with only four modes there isn’t much variety to them – you will find a more ‘active’ game by playing them and they make for great entertainment watching someone else play.

During any Festival game or while you are trying to top the leaderboards in quick play, you can work toward your next ninja belt – each grade is achieved by completing objectives and each rank rewards you with new blades, backgrounds and shadow effects – you can jump ahead and buy these with star fruit that is collected by playing the game. It’s a nice idea to include player progression and the mission objectives give you something to strive toward but the rewards are rather weak and nothing new from what you were able to unlock from the first title. 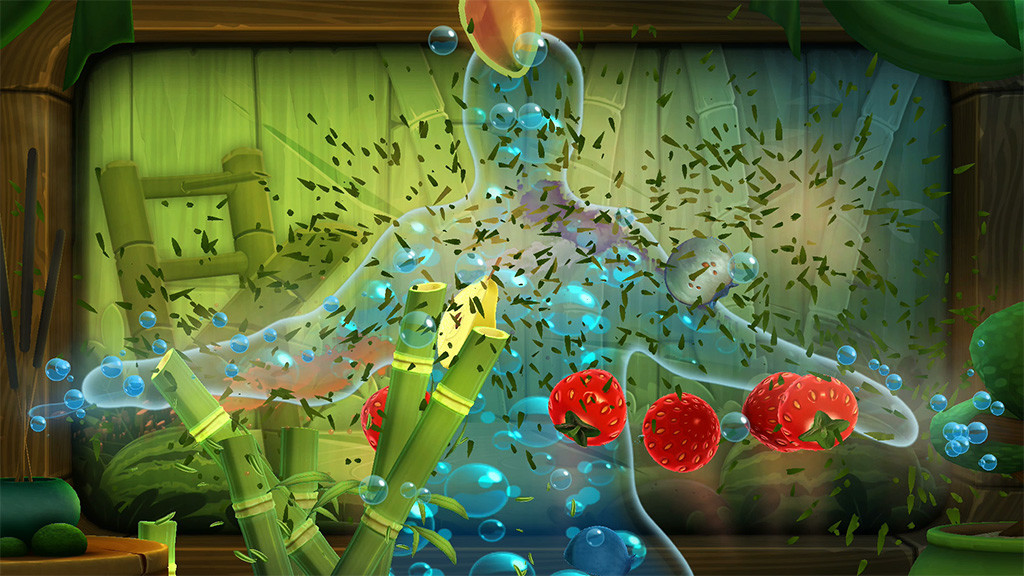 At its core, Fruit Ninja Kinect 2 is the same addictive, fun fruit slicing game but with mutators – it works and does so without making the sequel feel halfbaked. The mini-games make the action more competitive but spatial awareness is a must. While concentrating on the action onscreen, the wife and I crashed into each other on more than one occasion. It’s a shame there weren’t a few more options thrown in to make the game even more different from its original outing, but if it ain’t broke, why fix it! The biggest strength of the Xbox One edition of Fruit Ninja Kinect 2 is the addition of four-player multiplayer, which puts Fruit Ninja Kinect 2 firmly at the top of my family’s games pile.

Thanks to Halfbrick Studios for supplying TiX with a download code Fruit Ninja Kinect 2 (despite not being all official as such) has now officially been rated by the ESRB in North America as Suitable for Everyone – E!. It hasn’t yet been rated by PEGI in the EU, but it looks set to be the sequel to one of the most fun Kinect games on this planet. A release date and information hasn’t yet been detailed by developer’s Halfbrick Studio’s.

This is an action game in which players slice flying pieces of fruit in a whimsical setting. Players swipe to cut pieces of fruit while avoiding smoke bombs that briefly cloud the screen. On-screen text sometimes includes references to alcohol (e.g., “In Eastern Africa you can buy banana beer”; “Lemonade was originally lemon and honey wine”; “Dragon fruit can also be made into wine…

Not a great deal of specifics on the game except for the mention of Smoke Bombs, but gameplay is likely to be the same as all of the others – use your hands to swipe the fruit!

When official announcements are in, we’ll keep you posted. 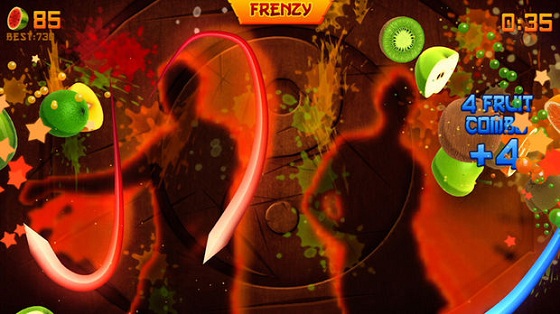 Fruit Ninja for Windows Phone 8 has landed out of nowhere. It’s already available on Windows Phone 7 devices for quite some time, but it’s appearance on the newer Windows Phone’s has come as a little surprise. You can download it right this minute by clicking this direct link to the marketplace, and unfortunately if you already own a Windows Phone 7 version you need to re-buy the game for the newer hardware! I haven’t yet tested if it doubles up on the Achievements though or applies them to the same game from your earlier version.

I am a lover of all things fruity, Banana’s and Strawberries, Pocket Fruity, fruit smoothies, fruit pastels, and even Fruit Ninja itself. It is a great way to pass the time and earn some extra Achievements whilst using your Windows Phone 8 on the bus, train, plane. You can’t beat mobile Xbox LIVE games to keep you entertained on the go. Once you get hooked on Fruit Ninja fro mobiles, you just will not want to put it down!

However, ff you do not own a Windows Phone device, but maybe instead you have Kinect – Fruit Ninja for Xbox 360 and Kinect is available on consoles. This version has now surpassed the One Million Downloads Milestone and is equally as mich fun. It expands the gamers experience with new gameplay modes and unlockable content too. Gamers can use their arms (and legs) to slice and swipe their way through the various game modes – Classic, Zen and Arcade – to become the ultimate Fruit Ninja. Fruit Ninja Kinect also has multiplayer functionality so Fruit Ninjas can slice side-by-side or challenge one another, but you will need to allow about 6ft space in the room.

More information about the Xbox 360 and Kinect Fruit Ninja can be found from Xbox.com – It’s worth a go if nothing else…