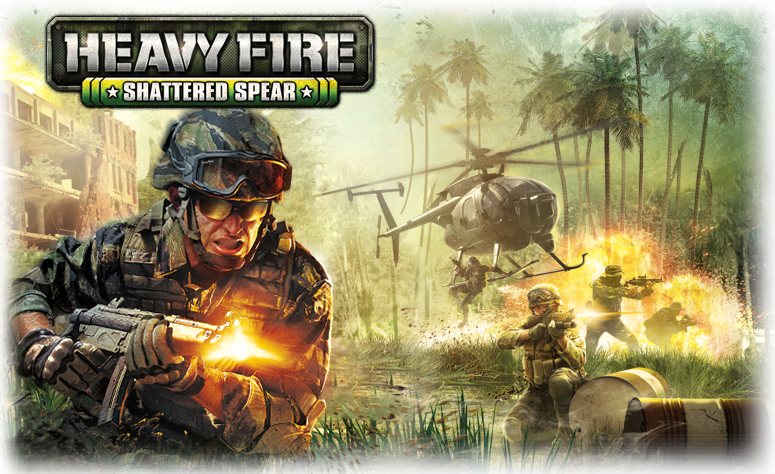 Thisisxbox.com recently reviewed the game and scored it 6.5/10:

I can’t deny how much fun it is to play and that when you realise it’s a fun arcade-like experience at a budget price; you wouldn’t be ripped off at retail whatsoever. Gamers who are glued to first-person-shooters could just pick an endless amount of faults because the game comes across as a first person shooting experience that is missing all the freedom of control you’re used to. As an ‘on-rails’ game, it’s a more than enjoyable shooter that you wouldn’t want to let it beat you. Enemies are savage and brutal, but unless you master your aim you’re killed very quickly. As an average game with a budget price, I’m going to give it an average score.

I have noticed the game is priced differently with different retailers. I can confirm that an American import will work on a UK console as some are being sold rather cheaply on Amazon UK and Ebay UK. Other retail stores list the game for under £20 which is a bargain for this title.

Heavy Fire: Shattered Spear is a first person on-rails shooter that is a sequel to the Windows PC game Heavy Fire: Afghanistan. If you have never played an on-rails form of shooter before then the best way to describe it is that it very much feels like a choreographed sequence of events where your role is only to aim and fire. Try to imagine a whole game similar to the ‘Breach and Clear’ moments in Call of Duty where your hardened war veteran is following a predetermined path whilst you only need point your gun and shoot. This means that there is no way possible to choose your own path, it’s a developer directed linear gameplay experience that is reliant upon your quick reflexes to pull the trigger when a screen full of enemy soldiers are firing from all directions. The idea is not to panic – because you just can’t run even if you wanted to!

On the cover art for ‘Shattered Spear’ it in no way gives reference to being an on-rails game except for a slogan “The Enemy: Unrelenting, Your Job: Pull the Trigger”. The images portraying a war game based in Afghanistan could mislead you into thinking it’s a first person shooter. It is in the first person perspective, but an on-rails game plays very differently and the controls are somewhat a nightmare to adapt to if you’re used to first person shooter controls. I was sent an American version, so the UK box art might display something else on the back by the time it releases August 2nd 2013. 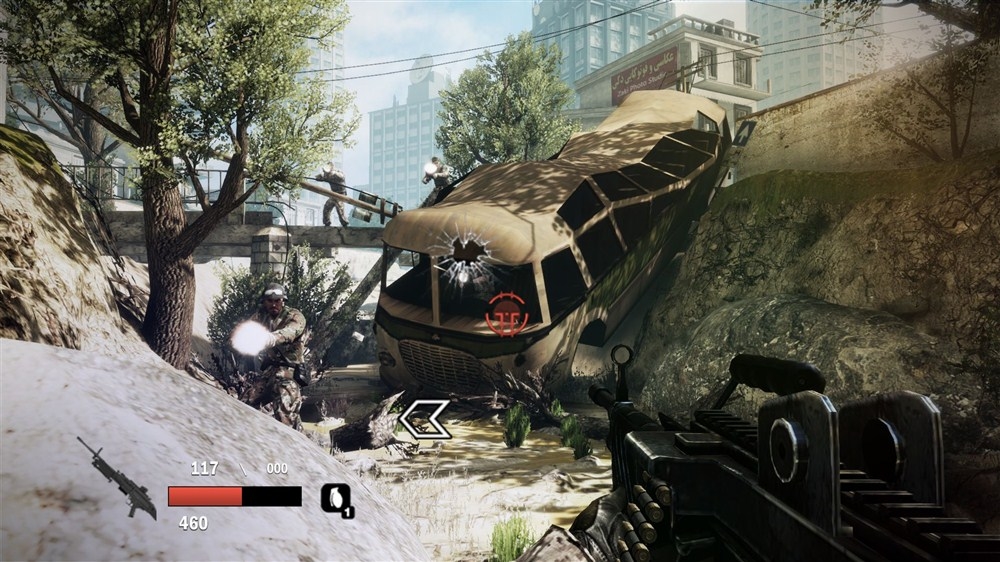 Due to not having any control over your characters movements, the left stick is now your Aim button, whilst your right stick will control your cover options when prompted to hide; this will give you some time to reload too. Traditional first person shooters use the right stick to aim and the left stick to control the character – I feel that if the developers TEYON, had kept to this familiarity and had the right stick for aiming and the left stick for cover, then it would have felt a lot less tricky to kill the oncoming enemies. There are no options to configure your controller layout either which is a shame because learning to aim with the left trigger is a whole new experience! Additionally the reticle you manoeuvre around the screen moves really fast so accuracy for headshots can be a challenge in itself at times depending upon the enemy distance from you.

The story behind Heavy Fire: Shattered Spear is not all the memorable or engaging, the game presents itself way more as an arcade action title in its gameplay than anything story driven. Your role is that of a soldier on the front line aiming to prevent nuclear Armageddon.  You start by going deep behind enemy lines to rescue a spy with critical information and then as you gradually progress further into the missions you get to play with a selection of weapons that include pistols, grenades, machine guns, shotguns, sniper rifles, helicopters, tanks, and even an AC-130! Thanks to the games Armory you do get to select a few unlockables to help along the way such as Faster Reloading, extra Clips, Grenades and extra health. In the midst of gameplay because your health and your ammo are limited there are emblems that can be shot well placed in each of the chapters to refill the bars on your HUD display. Never fear about fully running out of bullets as you will always have a pistol to hand until you can find an ammo refill emblem floating in the corner somewhere close by! 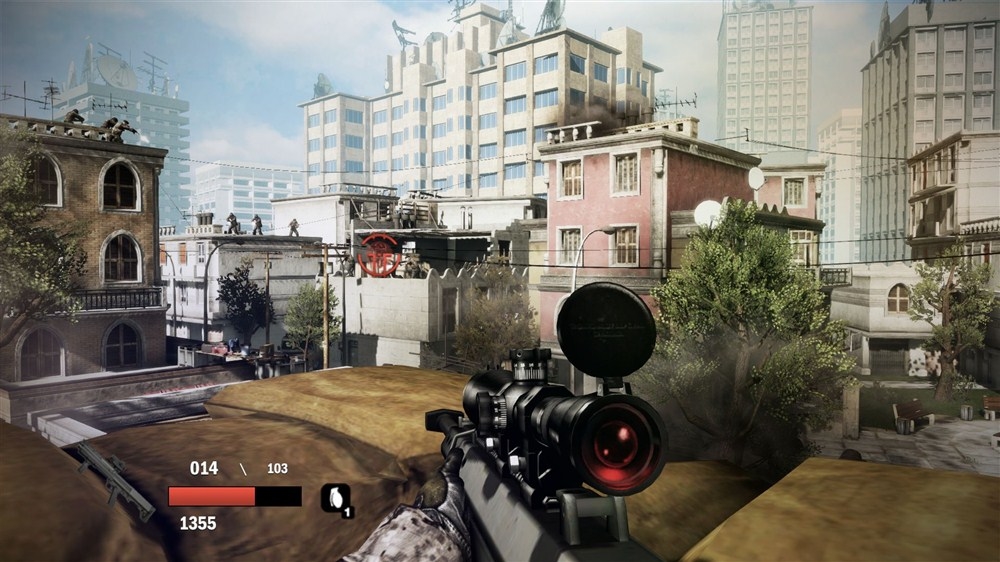 The scenery and settings of Afghanistan within the game environments are basic backdrops with so little detail that you could literally be shooting anywhere in the world. It’s not visually impressive, but it does have a way of winding you back in and wanting to play more. The action and willingness to want to keep going forward flows naturally once you have adapted to the control scheme which is great because even on a normal setting it’s difficult and at times challenging. Because your health is limited, your ammo is limited – each chapter is a test of will and perseverance. It does give you an even harder ‘Veteran Mode’ by the time you’ve completed the game normally if you really want a chance at grabbing all of the available Achievements? If you fancy sharing the gameplay you can play Heavy Fire: Shattered Spear co-operatively (local) with up to three other players as well as yourself.

Despite its basic presentation, non-engaging storyline and that graphically it’s not the sharpest pencil in the tin, I can’t deny how much fun it is to play and that when you realise it’s a fun arcade-like experience at a budget price; you wouldn’t be ripped off at retail whatsoever. Gamers who are glued to first-person-shooters could just pick an endless amount of faults because the game comes across as a first person shooting experience that is missing all the freedom of control you’re used to. As an ‘on-rails’ game, it’s a more than enjoyable shooter that you wouldn’t want to let it beat you. Enemies are savage and brutal, but unless you master your aim you’re killed very quickly. As an average game with a budget price, I’m going to give it an average score.

Enjoyable, but not all that memorable – certainly not perfect, yet still fun all the same!

The storyline is based around a dangerous combat mission where the player’s objective is clear; prevent nuclear Armageddon. Players have to rescue a friendly spy and retrieve the secret plans to an Iranian nuclear weapons facility, before fighting their way into the enemy base. The game also uses an updated graphics engine to provide players with an engaging and realistic visual experience.

As an on-rails shooter, movement of the character is set to a pre-determined path, leaving players free to concentrate on aiming and firing their weapons. This makes it perfect for casual gamers looking to try out a first person shooter experience.

Other features include a co-op mode that supports up to four players and over 60 unlockable achievements for achievement hunters out there.