During our HUGE Christmas Give-away we asked you to tell us your Game of the Year 2013. We had an absolutely outstanding response to the competition; the votes are in and counted and in reverse order here are the top 5 games as voted for by you.

Released in November 2013  this is an action-adventure video game developed by TT Games and is published by Warner Bros. The game features gameplay similar to other Lego titles, such as Lego Star Wars: The Complete Saga and Lego Batman 2: DC Super Heroes, alternating between various action-adventure sequences and puzzle-solving scenarios.

FIFA 14 was developed by EA Canada and published by Electronics Arts. It was released in late September 2013 for Xbox 360. It was later given away bundled with Xbox One’s on launch. 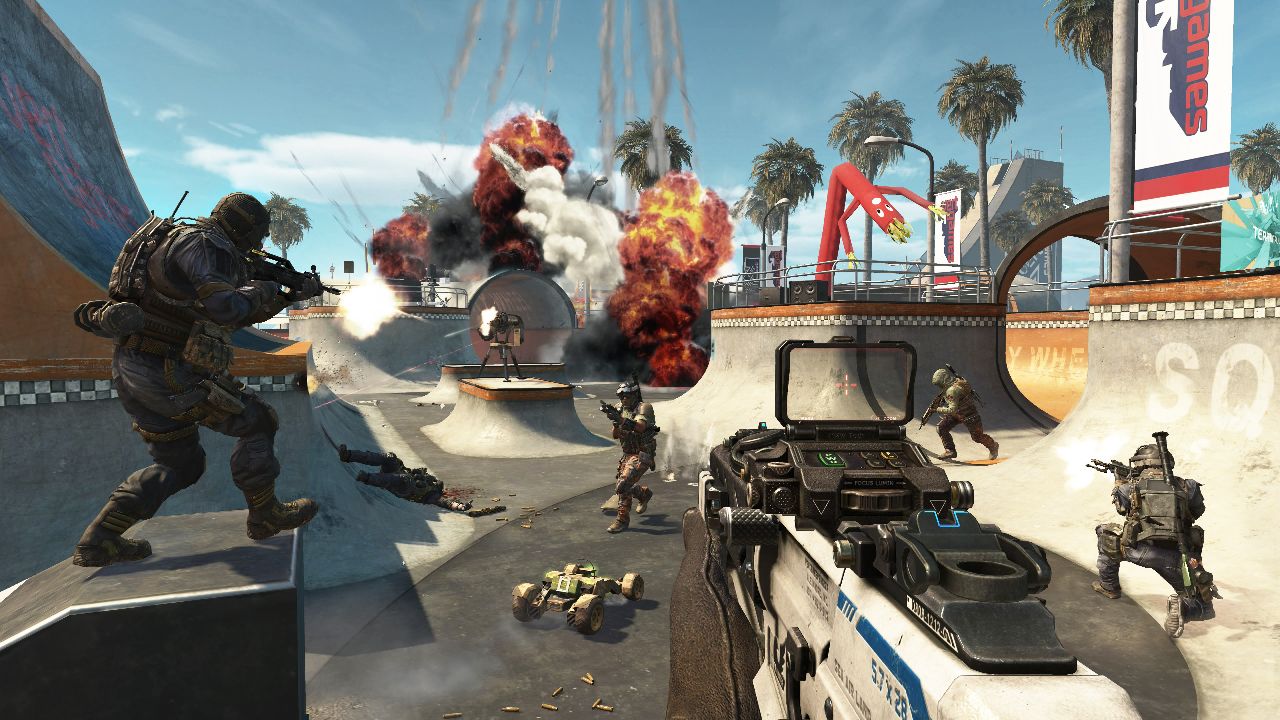 Although released in late 2012, Black Ops came in second with 12% of the votes. Call of Duty: Black Ops II was developed by Treyarch and published by Activision (Square Enix for Japan). It was released on November 13 for Xbox 360. 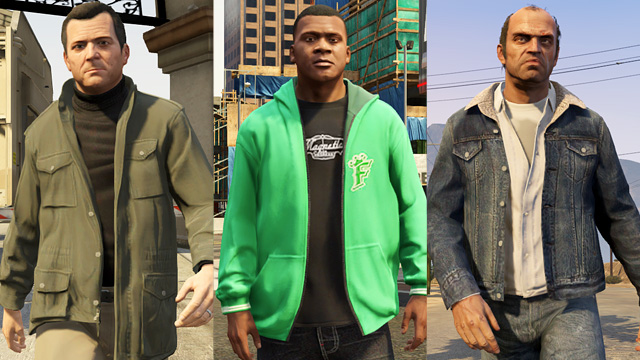 And here’s the full breakdown of games voted for and their position in our Readers Choice Game of the Year 2013. 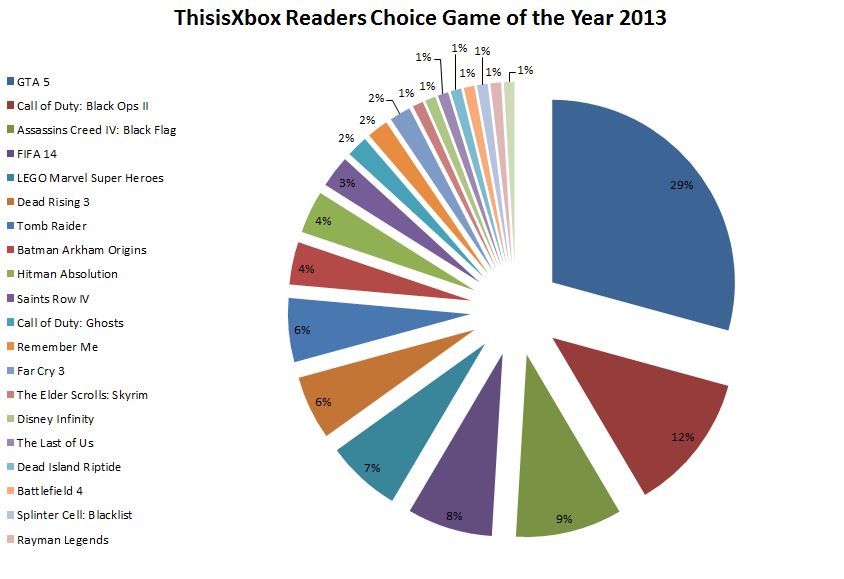 There has always been something special about any medium that is selected to get the LEGO Game treatment. From Star Wars to Harry Potter, Indiana Jones to Pirates of The Caribbean, Batman to Lord of The Rings, LEGO games have been a guilty pleasure for me over the years that when I first heard that Marvel was to get the LEGO make over I was literally smiling for days.

LEGO Marvel Superheroes is the latest game from ‘Traveller’s Tales’ and much like LEGO Batman 2 DC Superheroes last year, its a game that seeks to bring the large Marvel Universe of locations and characters together in a game. With all recent success of Marvel big screen films, the timing of this game is spot on for both Marvel and gamers. The best LEGO games have always found the right balance from the original source material they are using but also catering to the passion for that material from its fans, so has LEGO Marvel Superheroes found the right balance?

The introduction to the story shows Galactus feeling hungry and send his herald, The Silver Surfer, to find him a planet on which to feed on. The Silver Surfer finds Earth, but is detected and attacked by Doctor Doom, crash landing to Earth and captured by Doom. The attack leads to the creation of Cosmic Bricks, which Doctor Doom learns can power an ultimate weapon of destruction and calls on all the super villains of the Marvel Universe to seek out and collect the Cosmic Bricks for him. But S.H.I.E.L.D is also aware of the Cosmic Bricks and first sends out the Avengers to prevent Doctor Doom gaining the power of the Cosmic bricks.

The opening level to the game is the same as the playable demo that was released in late October. As the player you begin by controlling perhaps the two most popular characters from Avengers Assemble film, Iron Man and Hulk as they go on a mission to rescue hostages from The Sandman and Abomination villains who are demanding a Cosmic Brick for the release of the hostages. Immediately you can see just how much detail has been focused on getting the LEGO Versions of the Marvel characters. From the look to their movement animations, the LEGO models of Iron Man and Hulk are beautifully put together and very true to their original versions with inspiration clearly taken from Avengers Assemble. Although the voices are not provided by their Hollywood versions, the sarcasm and cocky attitude of Tony Stark is recognisable and Hulk is a more friendly feeling character shown in the interactions between Iron Man and Hulk and facial expressions in cut scenes.

Of course, no superhero can do without their super powers and abilities and this is where the great attention to detail by Traveller’s Tales pays off for Marvel fans. As you would expect, The Hulk is super strong and powerful, able to power smash multiple objects and enemies as well as being able to pick up large objects to throw as weapons. I cannot do justice to how satisfying it is to hear Hulk cry out “HULK SSMMAASSHH” as he jumps and smashes down on enemies and objects with destructive majesty.Another nice touch is that as Hulk you can also turn back into Bruce Banner. Now whilst Banner has no real superpowers, he is capable of using switches that as the Hulk you are unable to use due to his massive size. The transformation animation from Hulk to Banner and back to Hulk is great to see on screen as a fan and is a really great touch. As Iron Man you have the ability to fly, enabling great exploration of the levels. He can also shoot his repulsors as projectile attacks and using his Unibeam as his most powerful attack requiring charging. 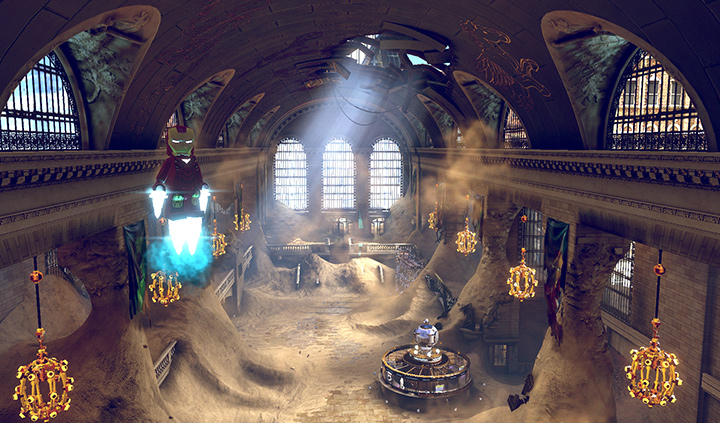 Key to how those superpowers are used are the playing environments of the levels. From the now traditional ‘destroy everything and collect LEGO pegs’ to the puzzles which require the combination of the different abilities per character and the game recreates the world of New York and the well known locations of the Marvel extremely well. Each puzzle requires a certain power or ability to unlock such as computer switches that can only be accessed by a character with high intelligence like Tony Stark or Reed ‘Mr Fantastic’ Richards. Other will require a character with super strength to move an object or to throw it to activate a switch so requires a character like Hulk or The Thing. If a new ability is needed to progress further in the level then its designed for an extra playable character to be added to the mix to allow progression. As in the first opening story eve, Spider-Man is added towards the end so his ability to shoot web lines to bring down environmental objects and his abilities are much needed when battling Sand Man for the final boss encounter of that level.

As you move through the level you will come across puzzles which will require a power which you will not have access to until you have returned to that level during Freeplay mode which enables the player to replay any level once completed but having the freedom to select any character that they have unlocked during play. This is the only way to gather all the collectibles in each level and will keep you coming back time and time again as you explore and enjoy the different combination of characters that the roster of over 160 Marvel characters will provide.

One of the aspects I enjoyed most with LEGO Marvel Superheroes is the free roam option between story missions that allows you to explore New York from street level to soaring through the skies with a flying powered character. By just going off story and exploring I was able to discover amazing treats such as the Stark Tower, the Baxter building and home of the Fantastic Four and the Daily Bugle. The Marvel HQ that is in New York is included. Going free roam enables you to collect more characters, Gold bricks and vehicles which can be unlocked by completing more mini games such as races or defeating a number of enemies in a certain time limit or hitting switches in the right order again within a time limit. You will also come across people scattered around the world that will serve as quests for you, which require you to seek out an object that they have lost, find it based on the clues they provide during the conversation and return which will reward you with a Gold brick or a new character.

From the S.H.I.E.L.D Hellicarrier to the streets of New York, the game successfully puts you as the player in the Marvel Universe. There is just so much to do in this game that to me it feels as big as my first great LEGO game Star Wars the Complete Saga, and that had six films to draw from. The story flows fluidly and the introduction to new characters as heroes or villains opens up the world just so brilliantly that each new level and part of the story provides a new challenge for those who know the Marvel universe really well or for those who only know it from the big screen films. The game makes references to the comic books, animated TV Series and films for the look and style of each character, with nice little nods that provide nice fanservice for long term Marvel fans. The various locations used are all recognisable and well used to provide a really solid and great game experience which is enhanced when all the elements come together.

Which is why it is such a great shame that the game does fall down on one aspect that I was most hoping for and pretty much just expecting to be included as standard, the lack of online Co-op play. It still has local co-op but it would have just been so epic to have been able to share the LEGO Marvel experience with a friend over Xbox LIVE. Previous games have used it whilst others have not. For example LEGO Lord of the Rings does not feature online Co-op but then LEGO Batman 2 DC Superheroes, which is the DC equivalent of LEGO Marvel Superheroes, does have online Co-op, which makes the absence of it this game all the more confusing and lessens what could have been one of the best LEGO Games experiences with the series.

Overall LEGO Marvel Super Heroes is a great addition to the series and for me as a long term fan of the LEGO game series one of the best examples of their style of games. There is so much to do in this game from the story itself to play through to free playing the levels with new characters to just free roaming around the world exploring and gathering collectibles. The Marvel universe and all its many characters are recreated lovingly in this game with great respect and knowledge of the material whilst also keeping to the traditional attention to detail that the LEGO games are known for. I completely loved this game and can easily return to experience it all again.

It is a must have game for any Marvel Fan of any age and it is as rewarding to experience as a game as it is to read a comic book or watch a Marvel film. The lack of online Co-op is a real shame and stops it from perhaps being the best game in the series right next to LEGO Star Wars The Complete Saga, but it is still one of the best and most satisfying game experiences I have enjoyed in 2013.

After the announcement of the much anticipated LEGO Marvel Super Heroes yesterday, we have had to wait one full day to see more of it END_OF_DOCUMENT_TOKEN_TO_BE_REPLACED