The twin-stick shooter genre is a path well-travelled on the Xbox platforms, with these typically highly challenging titles being an alluring game to twitch reaction players and pixel perfect performers, all vying for those hard to achieve achievements and those precious top spots on leaderboards. Ultratron is a little different, bringing a couple of refreshing tweaks to the formula that makes it a far more accessible shooter for newbies, but one that still delivers on its rewarding challenge for the veterans.

You take control of a robot, capable of firing energy weapons in 360 degrees, whilst moving around a small battle arena as waves of enemy robots spawn in and try to gun you down. Wiping them out is your mandate, with a multiplier kicking in and increasing your score for every enemy you destroy, and lost for every hit you take. Meanwhile power-ups randomly appear to enhance your weaponry or aid you with friendly turrets, and fruit travels across the arena, boosting your score and striking a nostalgic tone. In fact Ultratron plays heavily on a sense of nostalgia, providing charmingly basic 8 bit geometric enemies, as well as your character, along with recreating the CRT shape and flicker on-screen – with the flicker reserved for the end of level stats screen so not to compromise combat. However, despite its 1980 visual identity, its lightning pace, oodles of enemies, and neat lighting and particle effects on weapon’s fire hint at the modern power underneath.

As you destroy enemies they drop coins for you to collect, and at the end of each short level this currency can be spent on upgrades for your robot. It’s a cleverly implemented system, as your lives are tied to the amount of shields you have. Once you take a hit and lose a shield, it’s lost forever unless you buy it back at the upgrade screen. Additionally you’re challenged with risk/reward decisions on whether to purchase shields, weapon upgrades, pet robots to help you out, and smart bombs to clear the arena of foes, etc. You can’t buy everything you want, coins aren’t dropped generously enough, and in fact the coins also de-spawn rather quickly, encouraging you to collect them whilst possibly exposing yourself to danger. It ties the experience together wonderfully, creating a multitude of potential upgrade paths, motivations, and combat scenarios. 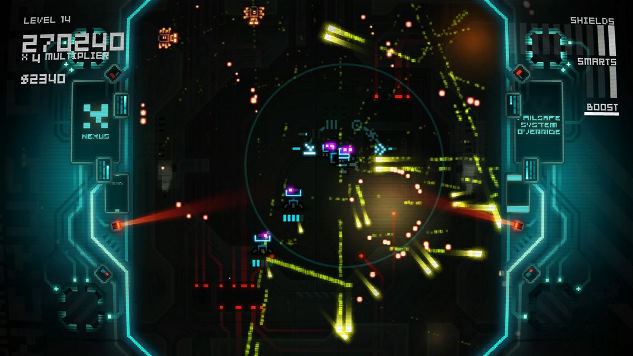 At the end of every tenth level is a boss and a checkpoint. Defeat the boss and you activate a checkpoint, meaning if you die you can restart from this point, with all your upgrades and coins intact. As such Ultratron isn’t as difficult as many of its ilk, and with a little perseverance you can make it through even the most difficult sections. However, the brilliant motivator behind it is that urge to create for yourself the perfect playthrough; one where your upgrades are well considered, where you don’t lose shields too often so you can buy the more advanced weaponry. The checkpoint system essentially breaks the experience down into ten level blocks you feel the need to perfect, and it’s a highly compelling system.

Veteran twin-stick shooter players are likely to find the challenge a little on the easy side due to the checkpoints; however, the online leaderboards and achievements offer plenty of incentive to perform staggeringly insane feats of skill. This becomes especially difficult after level 40 where bosses start appearing in packs and the levels between them are so intense and full of enemies you’re operating more on instinct. Ultratron achieves a terrific balance to cater for a variety of skill levels. 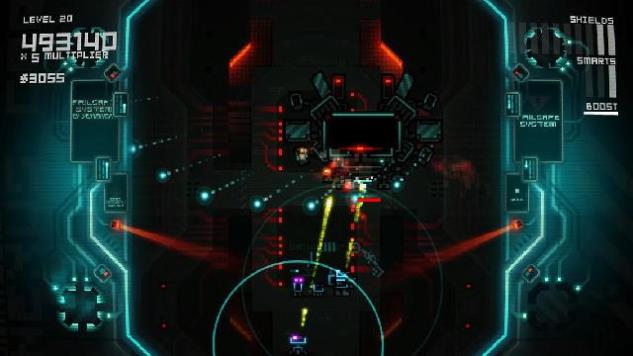 What appears to be a simply twin-stick shooter is soon revealed as a smart and highly inclusive action title, ideal for those well trained in fast paced shooters as well as those who are less so. A nostalgic aesthetic gives it a unique identity that’s easy on the eyes yet appealing, and the upgrade system that ties in to your amount of lives provides a brilliant tactical and strategic element to each playthrough. The genre is well represented on Xbox One but Ultratron is up there with the best of them and more accessible than most.

Thanks to Xbox for supporting TiX.