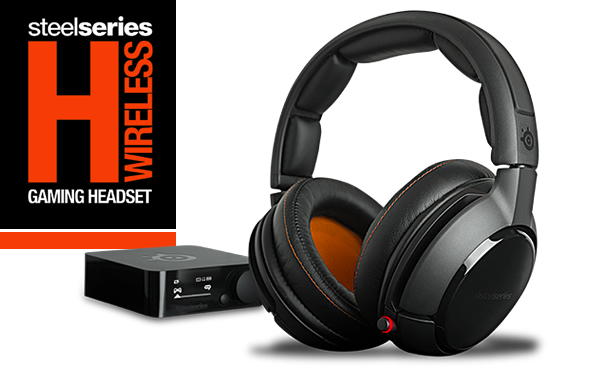 The guys and gals over at SteelSeries have been busy crafting their latest creation, the brand new H Wireless Gaming Headset. Not only is it a beauty but it’s also rammed full of features. The headset itself is beautifully packaged with a circuit board effect adorning the box which is printed in a spot varnish for added beauty to those that appreciate graphic design. The unit is slightly more heavyweight than the 7XBs and the quality and build is far better (not that the 7XB wasn’t any good). The headset features the same super comfy ear cups and retractable mic although this time round SteelSeries have made the cups fully rotate so you can rest them around your neck – handy for when you take a break from gaming and the mic is slightly longer and sits closer to your mouth. It always felt a bit strange with how the 7XB’s mic sat so far away.

I had fallen in love with SteelSeries after reviewing the Spectrum 7XB and even though it was only a stereo headset that connected to the Xbox via a 3.5mm jack and RCA splitter, the comfort and sound it created was exquisite. All the controls were located on the ear cups meaning you had to remember what all the different beeps and tones meant when selecting the correct EQ setting – now that’s a thing of the past.

The H Wireless’ transmitter has an OLED display that tells you exactly what menu you are in or EQ setting you have selected. The menus can be controlled with a spin wheel which is located on the ear cup, you can then tweak the currently selected menu item and cycle through menus by depressing the wheel. If you press the headset’s power button you can mute the mic (depress it for a few seconds to power on/off) when muted, a handy red light illuminates on the mic letting you know you are in mute mode.

The decoder box that makes all the magic happen isn’t too dissimilar in style to apple TV and it’s packed with inputs so you can easily integrate the H Wireless into all your audio systems whether they’re optical or analogue. It’s all very well having lots of options but what if you don’t have all the wires to make full use of the kit? Well, the H Wireless comes complete with a whole host of wires, even an optical cable – you won’t be left wanting for anything extra. The kit even includes multiple power adapters meaning you can take this bad boy abroad and still be good to go right out of the box.

The headset is powered by a slim lithium battery and the kit comes with two packs so one can sit charging inside the decoder while you happily game away with the other. The folks at SteelSeries really have thought of everything – well, most things. The menus and options may well be controllable via the headset but there are several menus that are only accessible from the decoder itself including the standby option which is hidden away in several menus.

My favourite feature of the H Wireless is the EQ settings, literally they are music to your ears. You can select an EQ setting from several presets or create your own,  what’s more is that you can even create profiles for each member of your house, each genre of game or even for each device that you connect to the decoder. LiveMix returns with the ability to tweak the ChatMix and if you hold the mic close enough to your mouth and speak loudly you can hear your own voice through the headset but not well enough for it to be a feature worth praising, the headset instructions do mention that to work effectively the game and chat audio must be connected via two different inputs but whether this allows your own voice to be heard better through the headset is one for SteelSeries to confirm because I couldn’t get anything worth while from my optical setup.

The mic still needs to be connected via a wire to your control pad (I assume Xbox One support will follow) and there’s also a second input on the headset so you can connect an mp3 device straight into it or share your game audio with a second headset. I’m sure there will be several audiophile fanatics out there that would point out issues with the highs and lows to the audio, but I feel that’s like someone pointing holes in a beautiful HD picture – unless you have over sensitive ears or just fussy enough to pick holes in a brilliant system then you’ll find the H Wireless a brilliant piece of kit. The sound is so clear that everything around you in-game sounds far more vibrant than it did previously, it’s like you’re hearing the sound in HD. Going back and playing games that I had poured tens of hours into I found that the audio sounded new as my ears picked up on several effects and instruments that had previously remained masked or drowned out.

I must admit it took me a while to adjust to the virtual 7.1 surround sound but wow was it invigorating to be able to place direction to the various sounds with a far greater degree of accuracy. While playing Gears 3, my mate held a revved chainsaw and walked around me in a circle. The resulting sound was not just beautiful but I could close my eyes and be able to say exactly where he was. For a virtual surround sound system to be this good is something that SteelSeries should be very proud of.

I’ve also used the headset to listen to music directly on my iPhone and boy does it impress. Infinitely better than my earbuds, I can happily sit for hours listening to music through them although I can’t say I’ll be stepping out into the street wearing them!

The H Wireless is a truly stunning piece of kit that builds upon the impressive 7XB and gives the full Dolby experience. It’s easy to use and offers that same level of comfort that I’ve become accustomed to. The icing on the cake is the ability to tweak and save your own EQ settings but at around £250 the H Wireless may be on the expensive side for some gamers. It’s worth noting that there were no hoops to jump through when setting them up and even though some people may point out that you could invest in a pair of Astros, I’ve never really got on with them and heard of several people who have had complications in getting them set up properly.

If you have the need for a headset that is the perfect cross-platform solution then look no further than the H Wireless Gaming Headset. SteelSeries were testing my resolve by teasing me away from Tritton with the Spectrum 7XB and with their latest effort I’ve now packed up the Trittons and given them to my brother – SteelSeries is the only headset for me.