The Uprising Map Pack for Call of Duty: Black Ops II was released last week, but now fans of the latest Zombie Map playground ‘Mob of the Dead’ can download the official soundtrack on itunes, Amazon, Spotify, Google Play and more. The award-winning developer of Call of Duty: Black Ops II delivers 24 original compositions created specifically for the “Mob of the Dead”, as well as previously unreleased bonus tracks from Tranzit and Die Rise.

The Call of Duty: Black Ops II Uprising ‘Mob of the Dead’ Zombies experience puts players on the island of Alcatraz, in the shoes of four Prohibition-era mobsters: Billy Handsome, Al “The Weasel” Arlington, Salvatore “Sal” DeLuca and Michael “Finn” O’Leary. All four are serving time in Alcatraz Prison, only to discover that being behind bars is the least of their problems. In order to survive, players must work their way through the steel cells and aging concrete buildings while fighting off a multitude of zombified prisoners and guards trapped on the island with them.

Fans can purchase Uprising as a standalone Map Pack for a suggested retail price of 1200 Microsoft Points, exclusively on Xbox LIVE.

You can read our review of the Uprising Map Pack via this direct link. Activision and Treyarch has dropped the second downloadable map pack content for Call of Duty: Black Ops 2, titled ‘Uprising’ which can be purchased now for 1200 Microsoft Points (discounted for Season Pass holders). There’s no new weapon DLC as per the first content drop, but fans of the original Black Ops should be excited to learn that the hugely popular ‘Firing Range’ map has been re-imagined as a movie set in this latest expansion alongside “Treyarch’s most terrifying Zombies experience to date” in Mob of the Dead.

The content within the Uprising Map Pack includes: ‘Studio’ – a map that replicates the original Firing Range from the first Black Ops game from Treyarch only this time re-imagined as a movie set. Not just any old movie, but a Hollywood blockbuster set in a futuristic world with Castles, Dinosaurs and a Western as you take a familiar stroll down a very different path. It has been beautifully remade and plays equally as great as the original – in fact, because it looks so damn good now as a movie set with different stages, shark infested waters, battling pirates, and the set of Space Monsters from the Moon 2 – it is way better than the original Cuban Firing Range it once was in 2010. Plenty of hiding spots, alleyways and a favourable map for close range combat – especially great for Domination and HardPoint game modes. 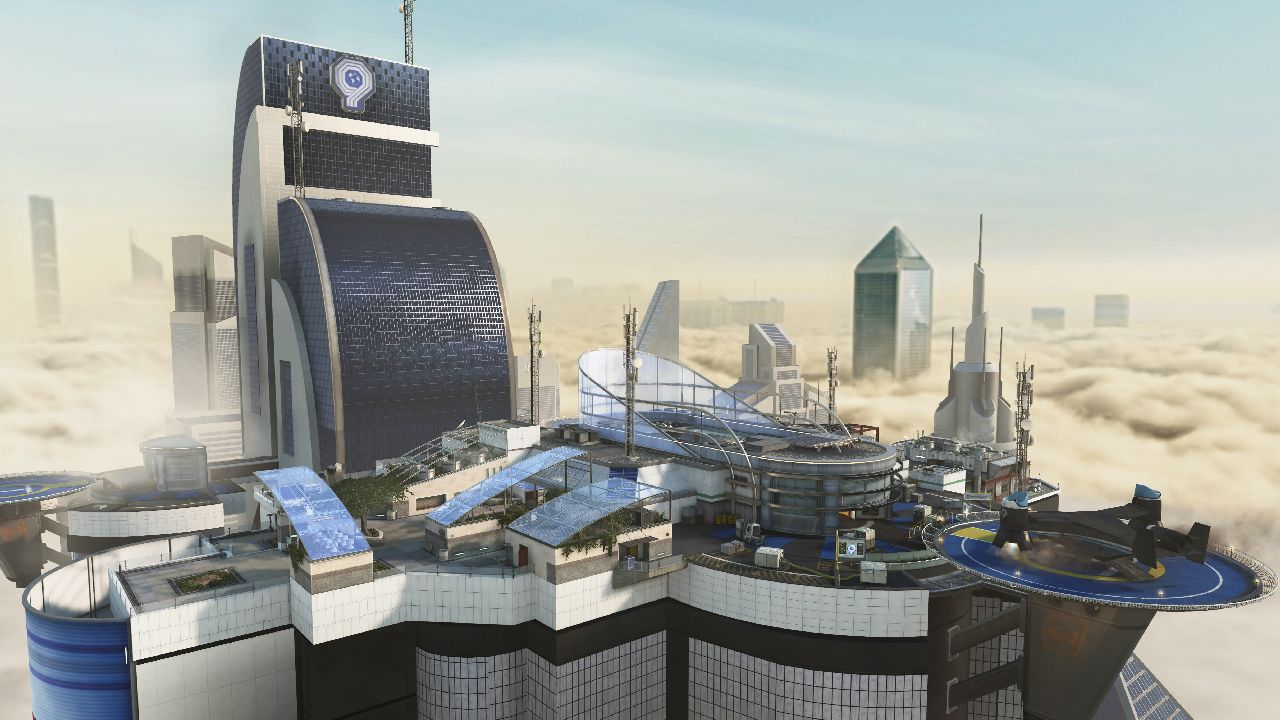 ‘Vertigo’ – a map set in the heart of India where the war takes you to the tallest building in the world from a very great height (don’t look down) as the city skyscrapers appear in the distance with the wind whistling in your ears. A very futuristic map with a design that reminds me of Halo 4 and Crysis 3, as the colours of grey and blue dominate the battleground. A mix of both internal and external locations to shoot through as you take some tight corners around a VTOL landing pad. Another great design which doesn’t allow for much hiding in the external locations as you are mostly very exposed. It’s best not to stand still on this map and sniping I am pleased to say would be mostly useless –definitely a non-camping map with impressive verticality scenery. Ideal for Team Deathmatch, Kill Confirmed and Free-for-All. Other modes that require players to group into an area will end up in a bloodbath or ultimately an unfortunate suicidal fall from the roof tops!

‘Magma’ as taken from the official description – this map has high temperature Lava carving through a modern Japanese village that leaves rivers of fiery damage in its wake, providing players with dangerous terrain, compromised cover, and frenetic firefights for survival. I would best describe it as an ideal Zombie map that has been re-worked for traditional multiplayer modes, but remnants of burning lava is scattered on the streets, and around the environments which leaves one wrong step and you burn in a hot fiery death. It’s quite a small confined map, but very deadly complete with a sushi bar and Karaoke Club if you look hard enough in the right places. As with all small to medium sized maps expect to get in harm’s way when openly roaming the streets as this map is more suited to Headquarters and Demolition game modes. 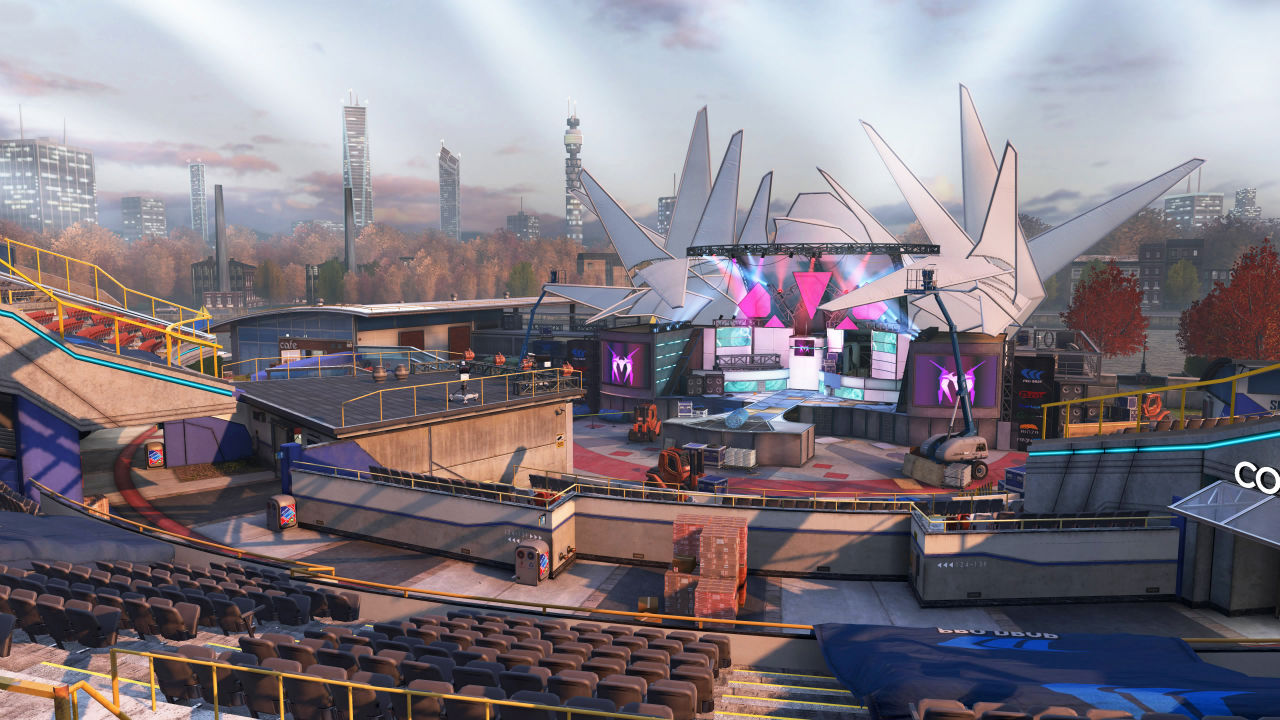 ‘Encore’ – is a London based futuristic music festival grounds complete with a rotating London Eye in the background. This map feels as if it pays homage to the original Black Ops map ‘Stadium’ only on a smaller scale. The central stage area with its flashing lights and dance floor provides players with a key vantage point overlooking the close-quarters battle of the surrounding amphitheatre and main tents. Sadly the drums aren’t playable and the Merchandise store is closed – but this small map is sure to be a great addition for playing in Free-for-All mode as there’s not many places to camp and with the majority of the map being external all players are likely to be very visible! Although Encore is graphically the best looking map in the pack – it’s small size doesn’t bode well for any game mode except Capture the Flag and Free-for-All. If Black Ops 2 had its own Face-Off lobbies as per the option within Infinity Ward’s/Sledgehammer Games Modern Warfare 3, this would suit that mode down to the ground.

‘Mob of the Dead’ is said to be the most terrifying Zombies experience to date – well…I’m not sure if it’s the most frightening experience I’ve played, but it looks like it certainly is the most ambitious Zombie playground ever to be developed in the history of Call of Duty Zombies! Set in the grounds of Alcatraz Prison there is an abundance of hallways, cells, multi-level locations and roof tops all waiting to be opened up in this dark, dismal island. Despite a celeb-fest character line-up comprising of Ray Liotta, Michael Madsen, Chazz Palminteri  and Joe Pantoliano  (if you even know who they are?) I would say that sadly it’s mammoth environmental setting is a let-down because the map just becomes complicated and difficult to navigate. It’s best described as a maze of stairways and halls with a mass of Zombies in chains after your blood; although you can enter the Afterlife and poke about in the spiritual world to shock charge a few electrical circuits – Mob of the Dead feels messy and frustrating to get to grips with, certainly not anywhere near as great as ‘Die Rise’ from the Revolution Map Pack a few weeks ago. 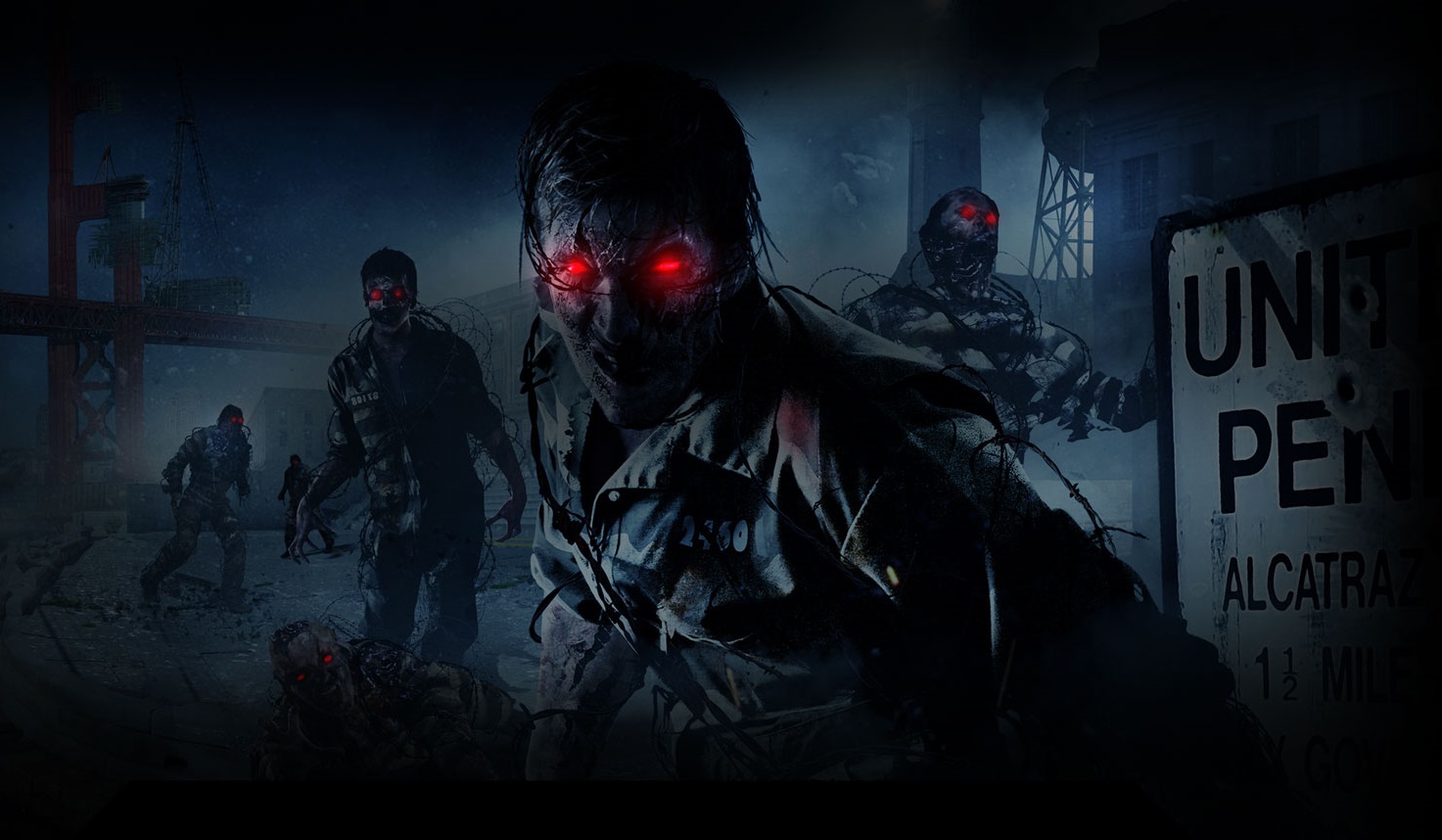 The Black Ops 2 Uprising Map Pack contains four decent multiplayer maps and a rather repetitive Zombie experience with Mob of the Dead, but if you’re after a bunch of new Achievements then you will likely work your balls off to master the scale of Alcatraz in this latest DLC offering. It’s not as revolutionary as the previous DLC since the maps are somewhat smaller, one a reworked map from the original black ops and no weapon DLC – but it does of course offer more variety in the games’ multiplayer which doesn’t disappoint.

Last month we brought you the rumour of the Orientation Map Pack image which surfaced for Black Ops 2, and today comes another tasty morsel under the guise of ‘Uprising’ that gives more reasoning to be legit since it was found in the source code of the CallofDuty.com website.

As found by Twitter members @Moriarty1975 and @MrDalekJD through the website source code – something anyone can do by right clicking a page and choosing view source or inspect element. The new Map Pack was described as: “Download the epic Call of Duty: Black Ops II Uprising Theme, featuring Studio, Vertigo and the Mob of the Dead, Treyarch’s most terrifying Zombies experience to date,” reads the description.

The Call of Duty Wikia noted that “Vertigo” was the name of a map originally cut from Call of Duty: Modern Warfare 2, while “Mob of the Dead” could potentially be a sequel to the original Black Ops’s Call of the Dead Zombie DLC.