Bandai Namco Entertainment Europe has revealed its pre-order offers in the up and coming title Dragon Ball Xenoverse 2. As expected the game will come in a variety of offerings including a Deluxe and Collector’s Edition. So check out below as we take a closer look at what’s included in these, the general pre-order bonus and also the Season Pass.

For players who pre-order any version of the game, a special character from Dragon Ball Super as well as the Tao Pai Pai Stick, to fly with style in Conton city, will be included free of charge. However for all UK customers this offer will be available exclusively from GAME.

Deluxe Edition – Fans who purchase the Deluxe Edition will get the game as well as the Season Pass. The Season Pass will have access to 4 massive packs featuring additional playable character, episodes and quests (including master quests), stages, skills, costumes and accessories. You will also have access to an early access character and Future Trunks from Dragon Ball super.

Collector’s Edition – Along with all the above the Collector’s Edition will also offer a 34 cm Son Goku Master Stars figurine and the official Time Patroller’s Guide. All of which will be presented in an exclusive collectors box. 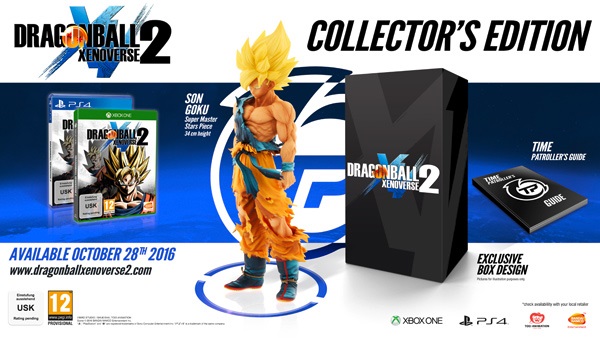